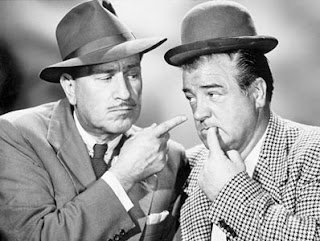 IF Abbott and Costello were still around today their famous sketch "Who's on first?" might have turned out something like this...

(sound of wood and metal scraping followed by breaking glass)


*I wrote the original version of this in 2004.  In 2005 it went viral, but after the death of my son in 2006, I lost track of things and didn't realize it was floating around the Internet unattributed till just yesterday (October 2009).  I want to thank everyone who graciously added attribution and a link to my website to the piece. A couple of funny film versions are now on the Internet and I hope they'll drop me a byline so at least I can claim the piece on my resume'.  Having written a couple of other unattributed viral pieces, I'm more careful these days to put my by-line on things.
Posted by Tom King at 12:47 PM

Thanks for the heads up. I have given you credit for this very funny skit.

I've also given you credit. To be honest I noted how sceptical I was, but I gave you a link-back either way. :)

I've added the credit to my blog post as well. Good for you for following up on your copyright.

Thanks for the copyright notice guys. I'd at least like to be able to claim the piece on my resume'. I've had a couple of things go viral and every time they are uncredited. It's flattering and frustrating at the same time. I appreciate everyone that gave me credit and especially those that gave me a linkback. Thanks!

I love this piece, Tom!

Thank you Karen. I appreciate the effort you took to say so!

We are a start-up radio theatre troupe. Please contact me re: producing your Abbott and Costello/Computer bit for one of our shows.

Sent you a copy of the script with the usage requirements. Should be in your e-mail.

Have fun. Send me a recording. I'd love to hear it.

This is great. I am a Gifted Education teacher at a middle school in Georgia. I have two very dramatic 8th grade male students that would like to use your skit to make a short video to enter in a Media Festival contest. Can we get permission to use it? Thank you very much! William Hooper

Hi Tom,
I'm a speech coach and I love this piece, and so do a few of my students. Could they perform it this year for speech competitions?

For those of you wanting to use this skit for your speech or theater classes, all I ask is that if you make a video for posting anywhere or for public viewing or print copies of the script, please use my copyright info. If you'll contact me at twayneking@gmail.com, I'll e-mail you a Word or PDF (tell me which) copy of the script's latest incarnation with all the copyright stuff included and ready to print.

Being an old used teacher, I appreciate the difficulty of finding free stuff like this. Use it for your class with my blessing. Say, "Hi" to the kids for me.

Tom, would like permission to use the piece for a church variety show on August 28. Thank you!

PCBO, Just send me an e-mail at twayneking@gmail.com and I'll send you permission and the latest copy of the script in a PDF file.

so me and a friend want to do this as a duo speech.... but the problem is that we need an 8 min long speech. this is only about 5min long; is this the longest version because I have googled and googled and this is the longest one. do you possibly have a longer version? if so could you please tell me.... or if not you could make it longer because it looks like it could continue.
thanks.....

This is the long version. If you add in appropriate sound effects, pauses and don't rush it, you could probably get eight minutes out of it. Lou Costello used to do these great reactions, head jerks, starting to speak and then stopping. Try working, physical comedic bits into the routine. The physical stuff is every bit as important as the patter. Watch several Abbott and Costello movies, particularly notice how Lou uses physical commentary along with the dialogue. Bud Abbott tended to rush things, but Lou had tremendous timing and incredible physical skills for a little fat guy. Use that. Capture his style and you should be able to make 8 minutes out of it. Let the phone ring a few time before you pick it up. Let Lou do a double take when Abbott says something that confuses him. That sort of thing.

Drop me an email me at twayneking@gmail.com and I'll send you the script with permissions to use it (UIL usually requires that). Break a leg guys.

This is great! I'd love to see this acted out!

I vote for Jimmy Fallon as Abbott!

There are several versions of it on Youtube. Ed McMahon and some DJ from LA did a version on the radio once. I did another version about Obamacare based on the same theme.

Anonymous said...
This comment has been removed by a blog administrator.
9:09 PM