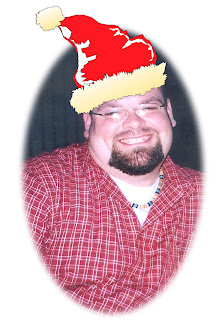 This Christmas we began a new tradition. When one of your kids is missing, Christmas is never quite the same again, nor will be until all of you are reunited in that wonderful world where we shall never experience again the pain of parting. When we lost our son, Micah, he left a big hole in our family celebrations. All of us have searched for a way to fill that hole with not much success. Micah was the family jester. He kept us all from being too serious.

Sheila and I were out shopping a few weeks ago, trying for everybody’s sake to get into the holiday mood. Worn out and almost out of cash, we stopped by the food court at Sam’s for a quick bite to eat. The young man at the counter who took our order looked tired and as he went back to get our order, Sheila noticed he had a slight limp and appeared to be in some discomfort when he walked. He was a big kid, not quite Micah’s size and build but near enough that Sheila remembered how Micah’s feet used to hurt him when he worked long hours.

Not content to express her sympathy with the boy she found out he had been wanting to get some of those gel insoles, but hadn’t been able to afford it. She picked up her sundae and while I was paying the boy, she slipped around to the side window and got one of the girls in the kitchen to find out his name (Ryan) and his shoe size.

She told me she was going to buy him some new shoes and gel insoles and sneak back and leave them for him with the kitchen staff. “It’s a gift from Micah,” she said, her voice catching a little. I understood what she meant and nodded agreement.

“It has to be a Christmas miracle, though,” she explained. We don’t have money to do it now, but I’m going to pray that God provides me with extra money to buy the shoes - maybe an extra shift for “Ray of Sunshine” (the sitting service she works for). “I could do that,” she smiled. She was excited for the next couple of weeks, looking forward to giving Micah’s gift. I just hoped Ryan would still be there when we got the money. I tried to figure out just how I was going to create some “extra money” for the gift without her knowing it was me.

Silly me. As long as I’ve lived with Sheila I should know better than to try to second guess them when she and God start working on a plan.

A week before Christmas, Mary Bob, the elderly lady Sheila works for, became ill and had to go to the hospital for testing. Sheila went with her to the hospital and worked 24 hours a day for the next 3 days. At the end of it, she was tired and worn out from being almost constantly on her feet for the better part of the time, but she had her shoe money.

We went by Sam’s and bought the shoes, but they didn’t have the insoles. As I checked us out, Sheila went over to the food court to arrange to leave the gift for Ryan when he came in. As she came back, I saw her face and the tears in her eyes and I knew something was wrong.

Ryan no longer worked there.

I knew what she was thinking. Why did it take so long for God to answer my prayer? It’s too late now.

Then, I saw her get that “look” in her eye. “Buy the shoes,” she told me firmly and with tears in her eyes, my stubborn little Christmas angel stalked off looking for Sam’s manager. He sent her to Miss Verdell, who ran the human resources office. Miss Verdell listened to Sheila’s story with tears in her eyes. “Don’t you worry,” she told us. “Ryan will be here next Wednesday to pick up his check. I’ll see that he gets his gift.” Miss Verdell began tearing up herself. “I understand, maam. I just lost my husband in October. I’ll make sure Ryan gets your present.”

We picked up the insoles at Wal-Mart that night with a gift card and took them home to wrap. Sheila signed the gift card “from Micah”. The next day we went back into Sam’s to leave Ryan’s shoes with Miss Verdell. By the time we got there, the story of Ryan’s shoes had spread all over Sam’s - everybody that worked there knew about it.

You know, I think maybe this wasn’t just about Sheila or Micah or even about Ryan’s sore feet. This year with the collapsing economy, layoffs and uncertainty, it’s been easy for all of us to forget what Christmas is supposed to be about. Who knows, maybe folks needed a little reminder this year. Meghan suggested that maybe the guys who work for Wal-Mart and Sam’s were feeling less than warm toward customers since a group of bargain hunters had trampled a Wal-Mart greeter to death just a couple of weeks before. Maybe Sheila’s concern for a footsore Wal-Mart employee helped them realize at least some of their customers do care about them after all.

We got a very sweet letter from Miss Verdell a few days later with a poem in it.

The God of heaven knew the exact moment in history when we needed His son. He knows the exact moment when He needs to send Jesus back again. I’m glad that He, who knows the end from the beginning, causes everything to work together for good for those who love Him.

Giving to others is a good memorial to Micah. I remember one Christmas my Pathfinder club kids were so distracted by who was getting what. They were in the absolute throes of greed and I thought, you know we need to do something about it - maybe adopt an angel from the angel tree or something. Micah grabbed my arm and said, “Dad, I know just who needs us.” He knew a guy who had just lost his job, they’d just moved here from 500 miles away so the family was all alone, flat broke, fixing to lose their electricity, there was no food in the house and the kids were getting nothing for Christmas.

Micah got names and ages and sizes of the whole family (there was some guesswork involved because we weren’t going to tell them we were coming). The kids took up the cause with a will. We didn’t here any more about what they were getting or ought to get. They were having a blast filling this little family’s wish list. The church found out about it and everybody chipped in. We loaded down Micah’s little Nissan pickup with presents for everyone in the family, a month’s worth of food and enough cash to pay the bills till they could get back on their feet. One of our members criticized us and told us we should spread all that around, but Micah and I told her a firm “NO”. He said God gave us this family to bless and we should show them just how mightily God can bless.

Micah was supposed to sneak up on the porch and leave everything, but at 6’4” and 300 pounds, he didn’t sneak very well and was caught. He and the husband unloaded the truck and as they carried in the cornucopia of stuff, the kids’ eyes got bigger and bigger and the mother dissolved into a puddle of tears. Micah said it was the best Christmas of his life, giving that family that wonderful gift.

It was a vintage Micah moment. At his memorial service, families were lined up 10 deep to tell us how much Micah had meant to their children. Giving a gift in his name this year really made if feel like something of him was back in Christmas. It helped fill that terrible hole in Christmas that Micah’s loss left for us. It is helping heal us in a way we had not expected when God first inspired Sheila to buy Ryan a new pair of shoes.

So, Merry Christmas to all of you and may you each have an opportunity to participate in one of God’s little Christmas miracles this year too - maybe give a gift to someone on behalf of someone you miss terribly this Christmas.

We do something like this, but we always called it, "Doing a 'drop'"! We wrap a gift, add sparkling apple juice, and drop it off at the door of someone we know, ring the bell and RUN! I started this tradition when the kids were small, because they, too, were turning greedy.

This tradition has become a tradition for my grown kids! They love it, and normally, anytime they are worried about something, or think they have a bad life, they "do a drop!" It teaches them to be content with what they have, and to focus on others and service, instead of themselves!